SO. First of all, I want to confirm the rumor : Yes, my work is going to be published in the newest Book of Ms Lisa Lichtenfels, greatest master dollmaker of the world. It’s is more than an honor to me to have been invited by Lisa to participate with my humble work to such amazing and grand project. I will of course, post update about this and announce the date of publication of the book as soon as I’ll know it.

Now it is time for me to present the bust I made for the exhibition I have been invited to, in London Canada the 10th of March at the Dollirium art gallery.

The theme of this special exhibit which celebrate the first anniversary of this Gallery is “Garden of Hedons.”

well, yes. Because I examined my own life and realized that there is only one sin I never surrendered to : Laziness. Everyone knows I work in a pathological way so Laziness had no place in this figuration of our inner demons.
Gluttony : I did and still do. Hyper energetic food allows to not feel tired when you need to sleep therefore to finish for example that damn joint you know that if you don’t right now it will never fit its socket tomorrow.
Wrath : my bad temper and way to speak my mind is not to demonstrate anymore… I haven’t been nicknamed ” Ernesto” referring to Che Guevara without reason : I can go mad for an injustice and fight it even at my own detriment.
Luxury : Well… Throw me the first stone..
Envy : I did. I have a pair of relatives who had their children when both older than 45. Perfectly healthy children. And the mother is talking all the time in front of me about the way her kids are soooooooooo in advance and amazingly healthy in spite of the age they had them. I felt envy. I hated her for this, but in fact I only hated myself because I have that deep “childache.” I wish my younger son to be that “healthy” and not handicapped… Also, I think that boasting in front of someone who cannot have children anymore is not that… Smart.
Pride : I have it when I look at my older son. When I see in this so young boy such pure essence of intelligence. When I received a letter of the national homeschooling program saying that he’s been the only kid of France to solve that Maths problem.. He, but his brother too, is my pride.
Greed : I have it. I must confess that I do. Many always wondered why I work in such small scale; well it’s because there’s been a time in my life when I couldn’t buy clay as I needed it. So I got used to work small to save it. Also I must confess that even at home : NOBODY, not even my kids, is allowed to touch my clay. I cannot share it. Anything else YES, even valuable, but NEVER my clay. I recently experienced what is a nightmare to me : I ran out of clay. And my supplier couldn’t ship it to me due to the very very exceptional low temperatures. I haven’t slept for two nights. Then… My otherself My P<3 sent me some. I want to say that even if ridiculous, THIS is the most beautiful gift I ever had.

This bust titled ” Whispers of my Sins” will be exhibited with my other bust I never put for sale and quite well known ” The Wind Sleeper” which is a tribute to Marlon Brando ( no one ignores my passion for cinema.) 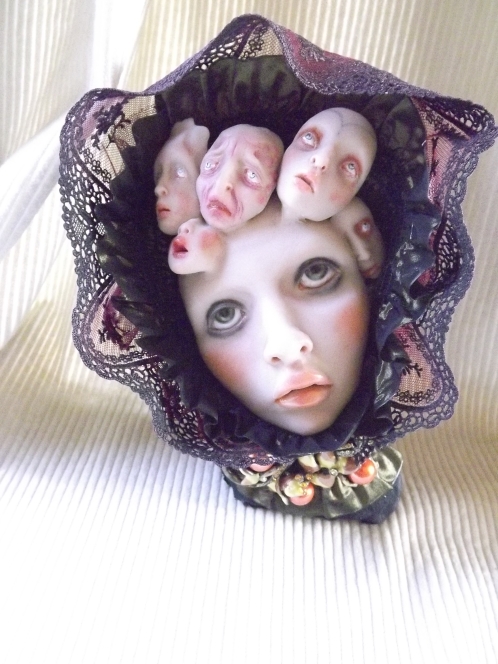 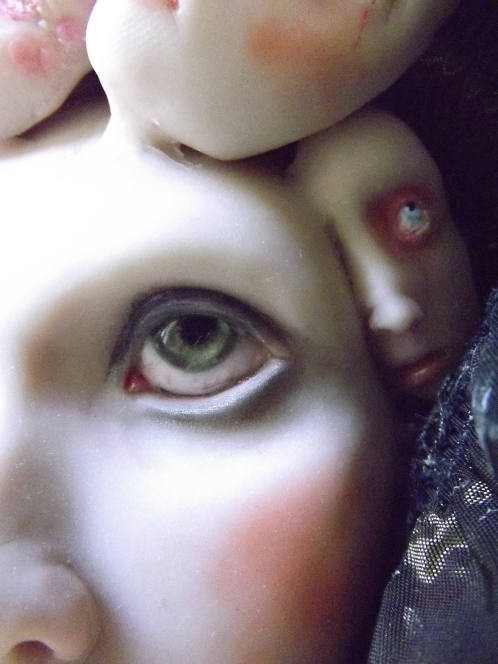 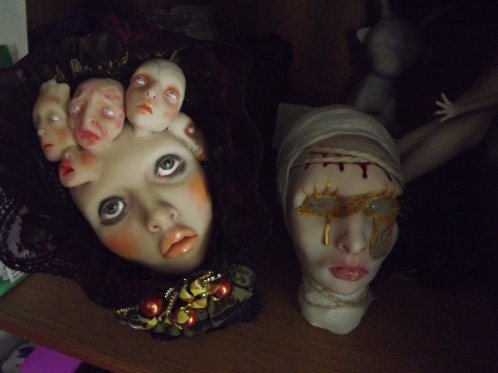 Let’s talk now and answer all the questions I received about my new prototypes for Resin.

Page, is going to be produced by my “secret american dealer”; BUT in the meantime I will open preorders myself ( cause I need to earn a living whilst it gets set up)

So, my first prototype is Aranud. It is named after my son Arnaud, and is simply Aleah but older. I played imagining how she would be older and following the lines of her face and body, using the same joints, I sculpted her. There is a WIP photo of her; in the meantime her body has been completed and only the hands and feet are to be made : 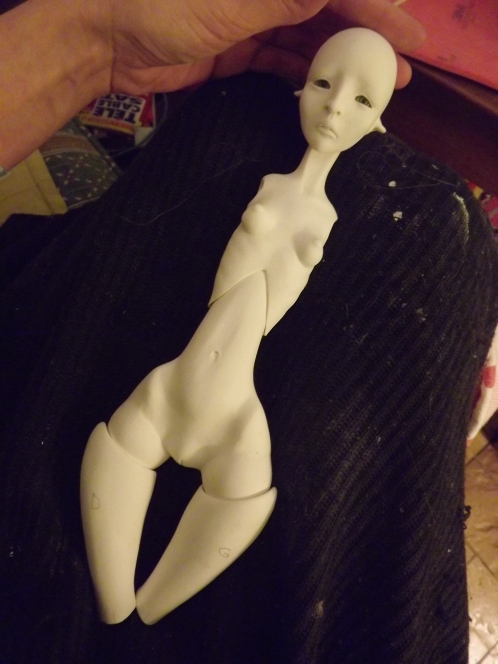 Then, as I liked her double jointed body very much, I made Louise, making another head for it. Louise is named after my son Louis and is an MSD as Aranud.

Now, and there will be another preorder for her very soon too; here is Miss Humpty Dumpty. When I was a child, I once saw a cartoon of “Merry Melodies” with the kewpies in. I am fond of the Kewpies. They are in my opinion the most lovable little ones in the world. In this very Merry Melodies, at a moment ( and God knows why) Humpty Dumpty sang a song. Then, in my young mind and FOR YEARS I thought that Humpty Dumpty had the same body than the Kewpies. I mixed all in my brain and realized not so long ago that Humpty Dumpty is only an egg with limbs. That disappointed me cause in fact, he was much better looking in my memory. So, Inspired by the delightful Kewpies and an old Merry Melodies cartoon, here is how I always saw Humpty Dumpty. She is a YOSD and I hope to propose her preorder in different color of resin :

About those preorders, I will of course publish a lot of photos very very soon. I also intend to “open” a shop on this blog as it seems that wordpress allows such transformations and adds to allow my collectors to preorder their dolls by a simple click via a Paypal button. I also heard that I can set up some special Paypal button for the Layaways formulas; clicking on it you pay the deposit, then every month the amount is taken by paypal till it’s full paid. That would be much easier for many of you who asked for this option. I also intend to propose as I said different colors of resin; and a random face up for those who want one.

Anyway and for now; if some of you want to be on the preorder list for Louise, Aranud or Miss Humpty Dumpty : drop me an email at twarkzit@hotmail.com and I’ll add you to my list.
The final prices will be given when my manufacturer will have given me the final cost of these dolls but I can tell you that I, as always, intend to make them the most affordable that I can; and an MSD shouldn’t exceed 450$.

Now, to my dear very patient collectors, here are some new photos of Little Aleah in a suit knitted and sewn by my mother ( as the Aleah presented belongs to my mom ^^) 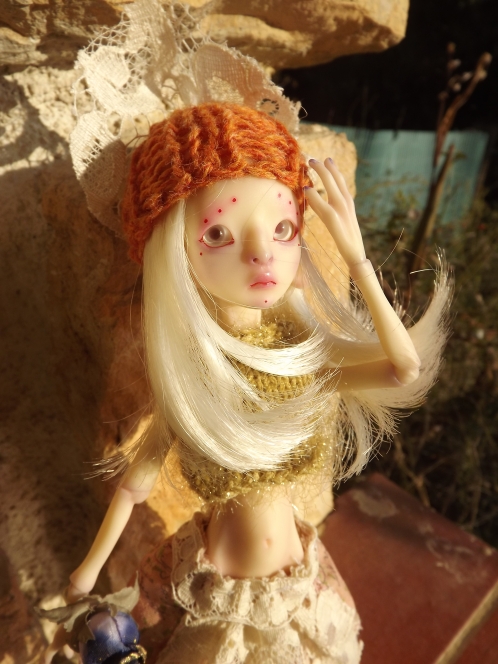