An unique piece. For a change.
Sidonie and Monkey landed safely, I am already painting and shipping them. Patiently waiting for Soda Starr, very soon and Stadnik‘s samples, a little later but this giant needs time to be produced.
An unique piece as in the good old days. It just happened. There will be no newsletter for this as it is out of the range of my regular manufactured work.

As everyone knows, I work watching TV. Movies, and rarely shows. For my birthday, my friend Lorraine offered me the Walking Dead season 1.
I didn’t watch it. I don’t really care about Zombies, but she insisted (since April yeah…) and then my other closest friend Nakama told me ” You must watch it. It’s not about zombies really and there are no dead children.” (she knows me so well eh?)
So my Nakama convinced me. Anyway I had to test at least something that she loves so much.

Then I understood what they both meant. The Walking dead is not about Zombies. Nope. It’s about all of us.

We all live under threats, constant ones. Social ones : social rank, appearances (how you look, how young you look, how thin you are, how fit you are…), money, what others think of you. We are all devoured by this society which is much more hungry than a horde of Zombies so we understand how the characters feel THOUGH we sort of envy them :

In the Walking Dead, your job doesn’t matter : no one has one anymore. The way you look doesn’t matter : it’s apocalypse and you’re just in Heaven if you can shower. Money doesn’t exist anymore neither. THEY ARE FREE OF ALL OUR CONSTRAINTS. But further : if our hungry zombies are impalpable enemies literally eating us a little every day, in the show, they are real which is in a way “healthier” and the survivors can simply shoot them in the head to kill them. What an outlet… Outlet that we do not have.

The social rank doesn’t matter : Only your value as a human being/survivor will make someone of you or not… and Here Comes Daryl Dixon.

Daryl Dixon, performed by Norman Reedus; and NO I am not going to make an anatomic analysis of Reedus face to explain the success of the character; first because it’s very disturbing to many of you when I make one of my ” Visual Autopsies”, secondly because I think the character himself is way beyond a physical shape (Hi to my friend Jill and her restraining order.. she knows why XD LOL) . Dixon is a redneck. Uneducated, quite rude, used to hunt his food which is most of time squirrels. But Daryl Dixon has what others don’t have : He is everything we needed in our stupid world to feel good about our own selves.
Daryl Dixon has a crossbow, that speaks to the collective unconscious and reminds of Robin Hood. The one whom stole from the Rich to give to the Poor. Daryl Dixon gives us confidence and dignity back.

That character makes me think about Mohammed Ali when he said ” I am going to show you how great I am.”

Dixon was an abused child, it’s easy to understand that he never had any social relationship except with his Brother Merle. Before the apocalypse, he was on the brink of our society. Even maybe totally kicked out of it. But now, all is changed. Daryl Dixon is not a talker, he doesn’t plot, he is a doer. and when he says something, he simply does it without fuss. That makes of him the most reliable character. His very hard past life, makes of him a fearless guy. He comes from so “darkaway” that nothing now impresses him. He eats as we all do in our kitchen ( come on, yes…) he swears (ok maybe just me here and not all of us) He is in fact, the one telling to all of us; for we are all someone’s redneck or freak : it’s not you being wrong to not fit, it’s society which is wrong and you could be someone great in spite and maybe thank to everything you are, bright and dark sides.  Dixon is our voice, saying ” let’s show them how great we are.” Also, as being from low class and uneducated, he is very approachable. We would all dare to talk to such man and we know he would not judge us. Tough redneck guy also implies dirty sex, but I personally don’t think that’s the point here. I think that his paradoxical personality makes the trick for the girl fanbase :  He is the one that will save you, but he has NO relationship and probably never had one. That speaks to the need of security we need, and also to our need to comfort someone and not just be a name on a guy’s cheeks list.

He has a sort of attachment to Carol though. Carol brilliantly played by Melissa Mcbride is a recent widow with a little girl Sophia. What makes that everyone loves Carol is that she is just a “good person.” She’s not a blond big boobed girl hysterically yelling for rescue; she is liked by Daryl only because she is a good person. The dream of any girl eh? As one says ” only your inner beauty counts.” Well, not in our world. Stop being delusional : wait for apocalypse if you want it to happen.
Anyway, don’t mistaken me, I find Melissa Mcbride physically delightful. I am even painting a canvas inspired by her because I adore her face. I just say that she is not the random bimbo.

Then comes season 2 and my favorite episode (so far) : Chupacabra.
Sofia, gets lost in the woods, chased by Zombies. They look for her. But when others are ready to give up, Daryl doesn’t. And he finds those Cherokee roses. Another great scene.
Here comes the river scene. Daryl fell from a hill cause his horse ran away. He has an arrow stuck in his flank, and he finds Sofia’s doll in the river.
He is going to go through hell, and even hallucinations of his probably dead brother Merle, to climb that hill back and bring the doll back to the camp.

When he comes back to the camp, he trespassed his own limits and does look like a walker ( a zombie) just to bring the doll back. Proving thus that Sofia might be still alive. Another survivor even shoots him thinking he is a walker. Fortunately she misses him.
I found that scene UTTERLY BEAUTIFUL. 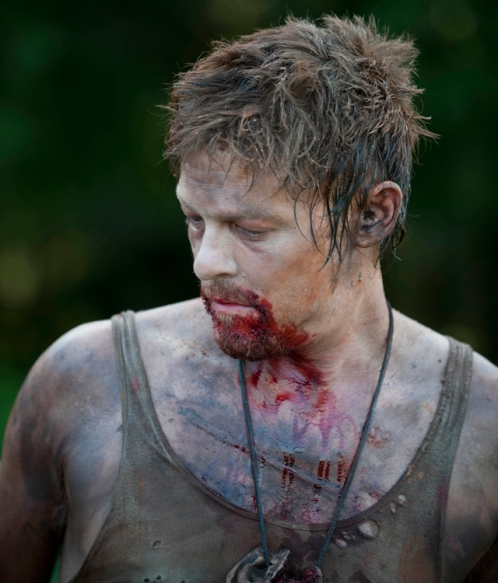 That episode made me think about Citizen Kane… Yep!
Cause after all, what is in common is a Rosebud. A sled for Charles Foster Kane, a doll for Daryl Dixon. The symbol of childhood which finally is the only thing that remains when all has been done, all has been lived, all has been lost : the valueless  toy that a child adores more than the world itself.
I doubt, due to his past, that Daryl Dixon ever had is own Rosebud, but the child he was looking for in the woods was not only Sofia, but a little Daryl lost too that no one looked for during three days.
You have here the ultimate strength of this character : the complete anti social he was, is the ONLY ONE to still have VALUES. He’s the one who knows what really matters or not. They are all ready to do horrid things to survive, but he won’t transgress his own moral code. Daryl Dixon is the Revenge of all the once abused ones, the emotionally damaged ones, the having social skill level zero ones, the freaks… People like (maybe) you and (surely) like me.

I am addicted to blood, stitches, my sculpting job and to my kids (not in the right order). Everyone knows that. So I had to sculpt something about this. And NO, it is NOT about Autism. Cause I don’t need Autism to love my kids till it cracks my bones.

I made a… Pieta.
This bust is a pieta and I painted her not like my “regular” sculpts but like a canvas. Her name is Netan but I am not going to unveil why. She represents what would remain of me even if I turn into a zombie.
For it is an hypothesis that maybe a bribe of who you were before remains once you turned and mutated into a zombie.
I know what would remain in my dead skull. I think that this is what would of happened to Daryl if he’d turn this very episode. He would have kept looking for her.
If I would have turned, I would only have kept in my dead mind the Ninoos, blanky of my older son ( pronounce Neenoos) and Mr Square Bunny the plushy of my younger son. Their Rosebuds. My name is Kane and it’s not by chance.

This Pieta cannot be “for sale”. She is a concept. The concept of what is absolutely valueless therefore ultimately priceless. She represents all that matters, all along the way and even by the end. I already received many offers since I show her in progress pics on facebook. From 1500$ till… Crazy amounts; thank you so very much for loving her so much even on WIP pics. I cannot sell her, but as you know me, I cannot keep her neither. I never keep my work. I always need to move forward or like a shark stopping to swim, I’d die. So she has to go. But she has no price.
Thus, if you want her, send me an email at twarkzit@hotmail.com telling me why you want her, and with YOUR price. She will go with the person whom understands her the best for, even if I can’t keep her, she is priceless to me.
To those wondering : YUP! To keep on with the urban legend about my work and the luck it brings to its owners : there is a drop of my own blood on my Pieta. In her mouth. It’s funny how many of you worried I wouldn’t do it now that 99% of my work is produced by a manufacture. I am touched you all didn’t forget about that little detail. 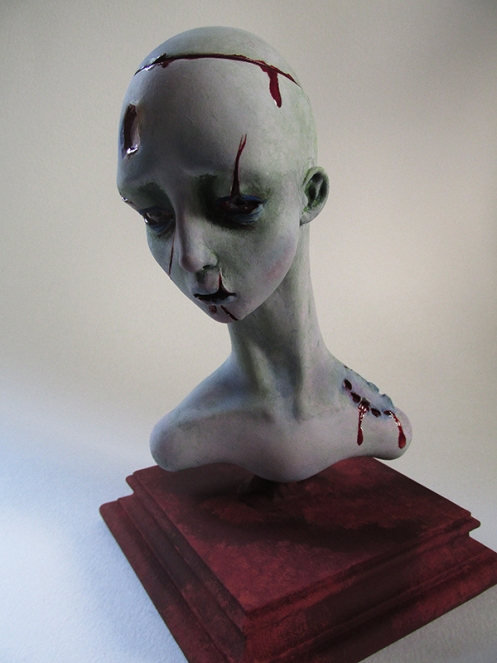 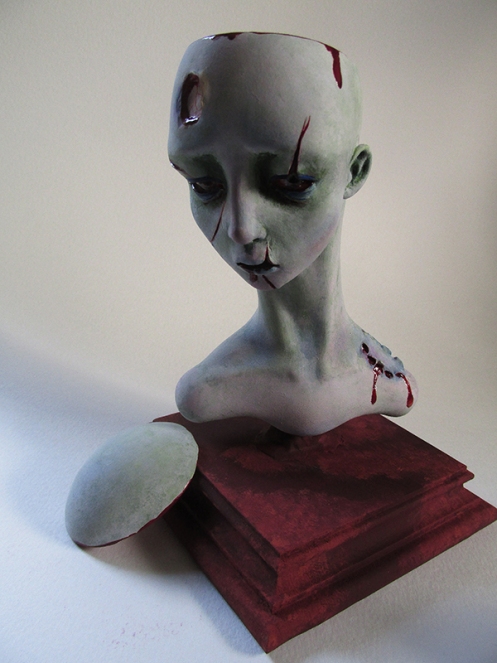 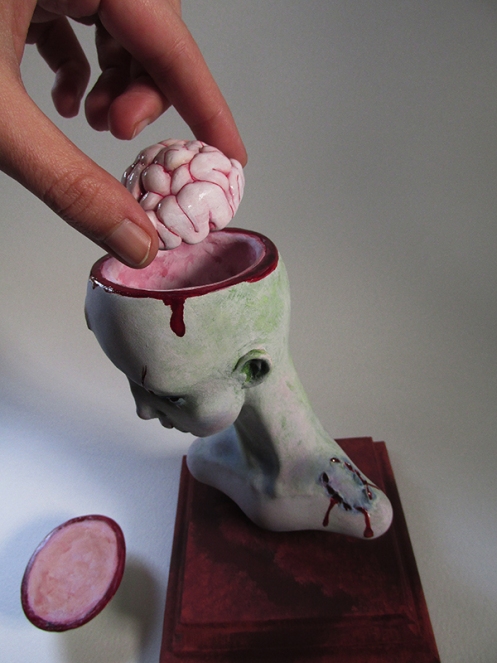 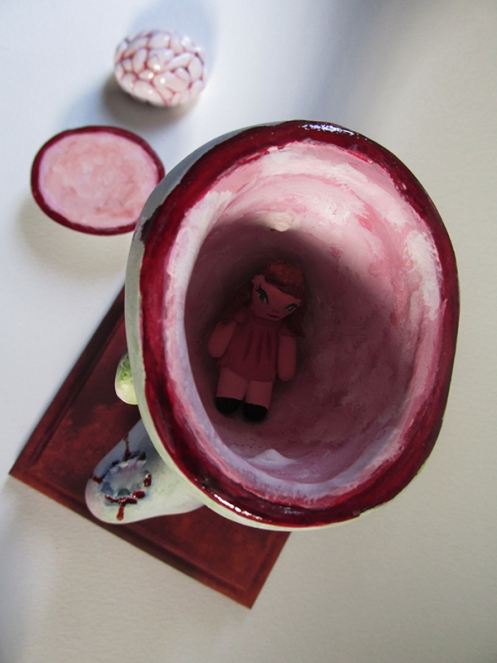 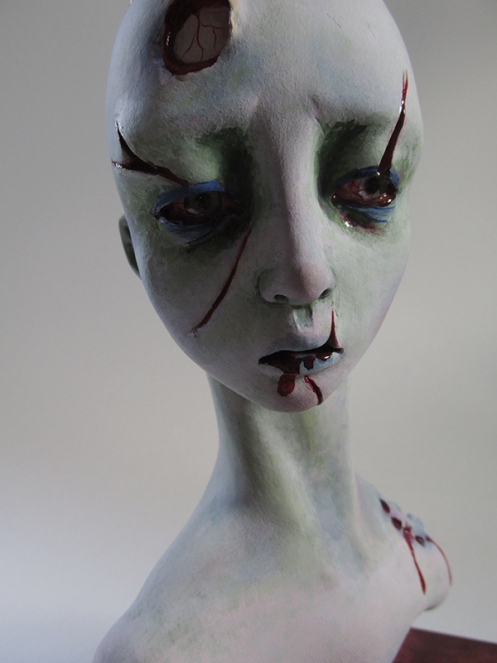