As you know, I am finishing, molding and casting new prototypes for my porcelain bjd lines.

If the half closed eyes one many of loved so much is named Clarisse after My P<3 ( immense artist and friend Paulette Goodreau.) and she knows why; if the asian one is named Claudia after my beloved Claudia Rohor who also knows why; right before the mold of this prototype and whilst my tiny elf is soft firing; I needed to make another head for that body.
When I was a kid, I used to read a comic titled ” Yoko Tsuno”, there was always weird things and people or creature in it; those who read it as well surely know what I mean. And I was fascinated by this other world she was running in. Yoko Tsuno always made me think to mix of warrior/princess I particularly loved.
Anyway, the other day; I was tidying my comics to give some to my oldest son Louis who’s fond of Calvin & Hobbes as I am and found some Yoko ones.
I know someone like her. A warrior, a savior, someone strongest than any and everyone. Her name is Marlene.

Marlene is the founder and boss of the center of my universe : CDHM. Once, when I was NOTHING and NOBODY; she welcomed me as a member of her community which is the greatest one in the world about Miniatures and dolls. And I remember my friend Aleah told me ” I’m sure you’re going to be friends.” Well… Today I can say ” AND BEYOND!” as I plan to one day move in Dallas Texas where Marlene lives! So as nothing and a nobody, Marlene asked me to teach for her on her website. Which awestruck and red as a tomato I did with her help… I can say that she has been the very first one to have trusted me as an artist; but not only : since about two years, she’s by my side. Whatever happens in my life, I KNOW that the very next second I will have a window popping up on my computer screen saying ” Marlene says : what’s going on? tell me.”
I know that she won’t say ” ohhhhhhhhhhh poor you…” cause it’s not her style nor mine. But I also know she will say ” Okay, we’re going to DO something.” And she DOES something. I must confess here that there’s not many people I owe something to, but she is one of those and I owe her to be who I am today.

She is HILARIOUS, brutally honest and frank, NOT politically correct AT ALL, benevolent, clever, generous but never a fool : she’s just my kinda woman!

As some of you know, my work will be exhibited in London Ontario in Canada the 8th of December in the Dollirium Gallery. I plan to make these new prototypes into porcelain for that show. But I needed something else… Something peculiar, majestic, and odd. I sculpted then this new prototype head, which is one of my favourite I’ve done so far. She is not even sanded but I wanted to show her to you cause I think she really is special.. I must say that I fell in love with her oversized skull, weird ears and little bump on the nose.. ^^

Her name is Marlene, Princess of Storm; she knows why and she will be shown during the ” Silent Night” exhibit at Dollirium Gallery. I hope that you will enjoy her difference as much as I do… And that Marlene will too; for her opinion always counts a lot to me. 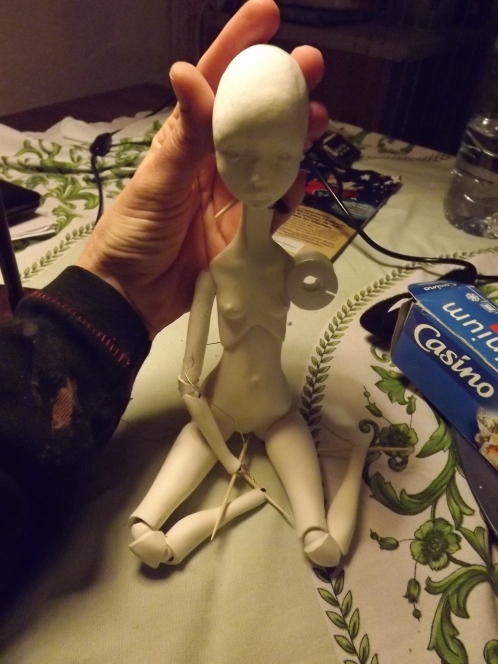