I post this using my informative right and right of reply as something has been posted on the front page of Oobie Doll, all this on the advice of my lawyer.

It is now time to announce that CKDolls will not work any longer with Angie from Oobie Doll.
Reasons being as follows:-

Firstly, complaints from my collectors buying through Oobie Doll and receiving eyeless dolls.
I tried to talk to Angie about this as eyes are all added to the orders by me as usual, but I never received any valid response from her regarding this.
Also the fact that it was constantly possible to order and check out  my dolls on her Oobie Dolls website as if preorder never closes. Technically, anyone could purchase as many of my dolls as they wanted after the closing date of the preorder. When preorder is closed, it means I ordered a certain amount of dolls from my manufacturer. PERIOD. I don’t have an endless stock.  When Trish approached Angie about this, showing her how it was possible to order and check out in cart 21 Grooks, Angie took it very badly.  This also caused issues with collectors coming to me asking why I refused to sell them dolls after the preorder closed, yet Oobie Dolls could still continue to order, which was actually not the case.
Then there is the more grave issue of my dolls going missing. In a parcel that I shipped to Angie  of the Summer Sale, a Soda bunny bjd was apparently missing according to Angie. I was sure on my side to have shipped her, but Angie said the doll wasn’t in the box.
Angie never paid any shipping or insurance costs when ordering my dolls, I was always expected to pay for this.  Because of my too trusting nature and also I thought we were friends, I did not insist on going down the road of force her to pay as anyone should for my shipments to her and insurance cost, which I was later to pay very dearly for….
When the second preorder for Stadnik was opened at Oobie Doll, Angie suddenly told me she never received the parcel for her first stadniks order which were shipped five months previously! Now because of the long time lapse, I was unable to make any claim against insurance, even though I had full tracking, I was left unable to gain any compensation for my most expensive doll to produce.  This left a very big hole in my pocket as you can imagine….

There was no claim to fill, no investigation that could be done, no insurance to ask for as all my parcels have been delivered without any incident so tracking is valid just for a month.
If there’s an incident then tracking is valid for 3 months. If it is a delivered parcel, 21 days are the delay the receiver has to fill a claim at his post office if there is a problem.
Nothing can be done passed these delays to claim a lost or damaged parcel.

So 5 months after shipment without incident :  the Stadniks were ghost dolls, no way to find them back if ever lost, no way to get insurance.
I decided anyway to ship Angie two new stadniks even if I couldn’t be blame for these missing dolls. Again, I did this because of my too soft and trusting nature ( am a moron. But am working on it.); for I believed we were friends and loyal business partners.

The two extra Stadniks I shipped her were at my complete expenses.  So in my last parcel to her shipped on November 11th, I shipped the 2 stadniks plus one extra hand, my own Soda as she was the only one I had left, 10 baby humpties, 4 grooks and 3 big humpty dumpty.
When the parcel arrived, Angie told me that the bunny was still missing, along with 4 grooks and 6 baby humpties.
After investigation and the precious help from Trish, it appeared that I made two mistakes.
Angie had ordered 4 more pink Grooks that I never saw as all the orders were mixed together with the summer sale; so I refunded her for those that I didn’t ship as I never ordered from my manufacturer for I never knew about these extra to her initial Grook order, And that she ordered not 10 but 12 baby humpties, as again, as mixed with other orders in a very unclear way when she ordered them, I missed two babies from another extra order from Angie. Therefore Trish shipped her 2 extra baby humpties right away that she had in her possession; they have been delivered and fine.
When Angie had been sure to receive these two new Stadniks, she then told me there was no order for this preorder. Nobody ordered Stadnik.

Back to the issue of the missing dolls from my last parcel, according to Angie this was missing 2 Sodas and 4 baby humpties.  Trish, my manager, asked her to fill a claim at the post office as the parcel did not go missing and showed as delivered : I cannot do a thing all alone on my side without the report and sworn oath from the receiver. Otherwise we could ship anything for any insurance and once delivered we could all claim for insurances and the postal services all around the world would be bankrupted since a long time. Anyway, from what she said, after a while, she “told” her post master and that’s been it. Trish explained the process of filing a claim several times in vain as Angie was saying we were not clear on this. Until the 21 days passed then she said she would claim the next day ( she did not anyway), anyway, it’s been a while since “after the meeting with her postmaster” Angie keeps on saying my insurance was 200$ so was it worth it for me claim any insurance. First of all it can only be euros and 200 euros is NOT the amount of the insurance I paid for.

But they checked and am wrong… OK….

So no more insurance, no more claim to be filled and I cannot ask for investigation anymore in order to get my insurance .
So two bunnies were missing from first parcel and now second one. That makes two bunnies shipped and never received (from what she says)  Her collector for the bunny was waiting since summer sale so a bunny price to be refunded by me..Ok…. 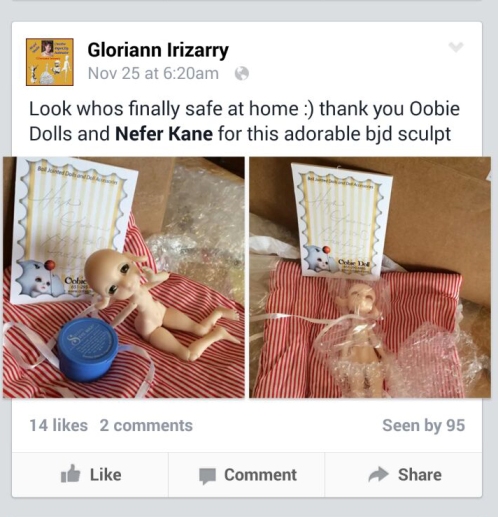 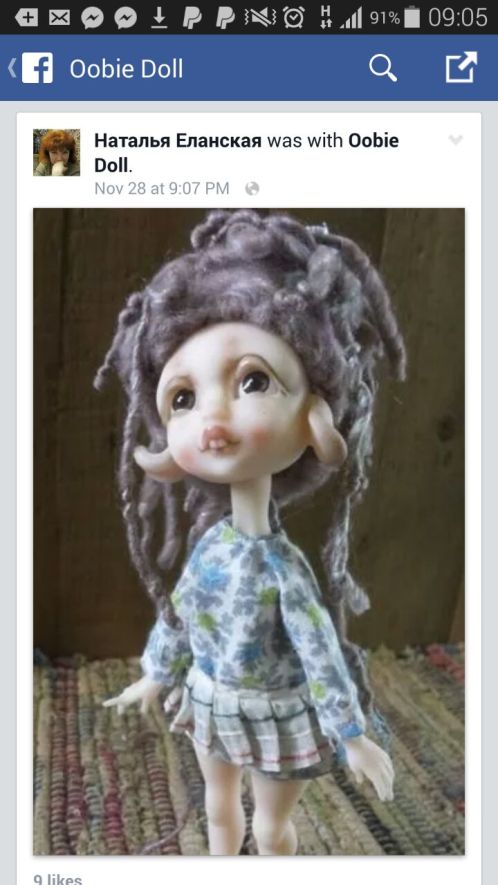 Last night December 4th( and I have screenshots of these emails and the original emails as well at disposal in case of doubts) I received this from angie, who already told me a while ago in a previous email that “it would also be my advice to not post any of this on facebook.” :